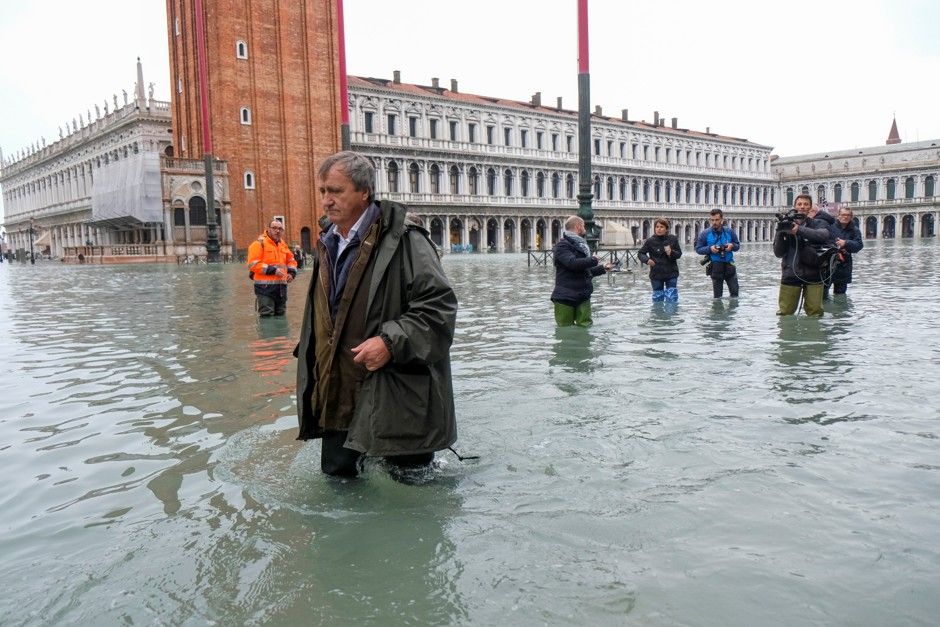 On Wednesday, Venice was reeling after experiencing its highest level of floodwater since 1966. High tides from the lagoon reached more than 6 feet higher than their usual level—the second-highest ever seen since records began in 1923. Two people were reported dead. Waters entered the nave of St. Mark’s Basilica and parts of the La Fenice opera house, left boats deposited on the canalside paving stones and in the middle of city streets, and surged across more than 80 percent of the city’s surface. Regional Governor Luca Zaia described a scene of “apocalyptic and total devastation.” In a tone that appeared to almost beg Italy’s central government to take the floods seriously, Mayor Luigi Brugnaro made clear in a video announcement on social media from a flooded St. Mark’s Square what he thought the culprit for the flood was: climate change.

A vaporetto, or public water bus, lies stranded on Venice’s waterfront promenade after record flooding. (Manuel Silvestri/Reuters)
The evidence suggests he is right. The Northern Adriatic has always been vulnerable to high water in autumn and winter, when astronomical tides are reinforced by prevailing seasonal winds. But out of the 20 highest recorded tides, five have been in the past 10 years, with one of those occurring in 2018. Along with this pattern of higher tides due to overall sea-level rise, Venice is subsiding—the city has sunk about 23 cm over the past century, a process exacerbated by erosion from cruise ship traffic. The historic city, a UNESCO World Heritage Site, faces an increasingly dire situation.

It should be noted that Venice is reasonably well habituated to more moderate occurrences of seasonal acqua alta. The tidal flooding can recede quickly—at this writing St. Mark’s Square was already more or less dry, although it is likely to be inundated again later on Wednesday by another tidal surge of about 5.2 feet. Shops often store their goods on upper floors or high shelves during flood season, and residents keep their more vulnerable possessions on upper floors.

But the extraordinary severity of increasingly frequent major flooding is doing long-term structural damage to buildings that are centuries-old. Including this week, St. Mark’s has only been flooded six times in its 1,200-year history. Three of those floods have been in the last 20 years. As Venice University restoration professor Mario Piana told newspaper Corriere Della Sera, the effects of these inundations can be ruinous: “The salt has attacked the mosaics, the bricks, the columns, which have been there for a thousand years, even marble that has been recently replaced. These are subtle damages: The water goes away and evaporates, but the salt remains inside.”

What makes this round of destruction especially frustrating is that Venice’s massive flood defense system is almost complete. Costing almost $6.5 billion and under construction since 2003, the Venice Lagoon’s vast MOSE flood barrier is due to come into service in summer 2021. A string of 78 raisable barriers threaded across the lagoon to block tidal surge, the MOSE project represent Venice’s moon-shot bid for survival in a warmed world. But progress has been slow, rocky, and dysfunctional. In 2014, Venice’s previous mayor, Giorgio Orsoni, was arrested after being accused of siphoning large amounts of money from the project (a charge of which he was later exonerated).

Construction resumed after a hiatus in 2016, but reports emerged this summer that some of the materials used were already degraded and damaged by water, and would need repairing before they had even come into service. Plans to test a major section of the barrier on November 4 this year had to be canceled due to technical problems, and it is feared that costs could ultimately rise as high as $9 billion.

It’s still not clear whether this extremely ambitious engineering project will be able to save Venice from further major damage. But as the effects of high water become more catastrophic, for many in the city, it can’t come soon enough.