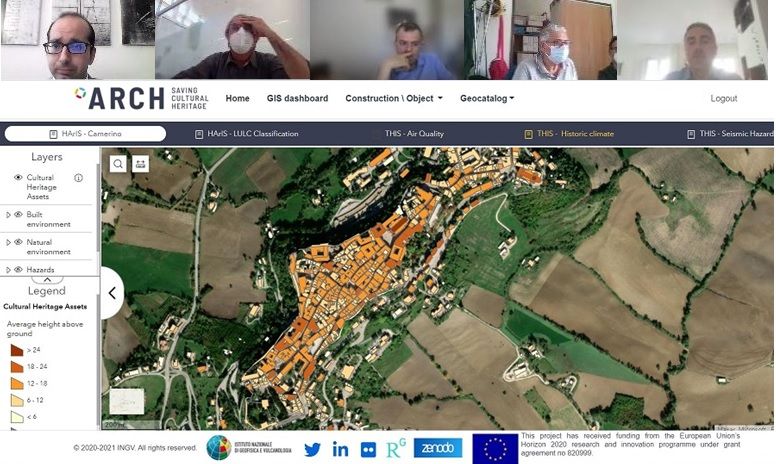 The Municipality of Camerino (Italy) organised a co-creation meeting, supported by ICLEI, to discuss Information Systems and GIS-based tools developed by the Italian National Institute of Geophysics and Volcanology (INGV). These tools can support the decision-making process at the city level to mainstream urban resilience in local policies. Municipal authorities and staff explored these tools with the support of the ARCH research partners (UNICAM, INGV, ENEA). Furthermore, the National Civil Protection Department and the municipality of Appignano del Tronto (Italy) – a keystone city involved in the Mutual Learning Framework – attended the meeting.

The meeting began with Dr Cristina Garzillo Leemhuis’ (ICLEI) introduction of the ARCH Project and the involved city cases. Eng. Antonio Costanzo (INGV) displayed the GIS-based tools: “HArIS – Historic Areas Information Systems” and “THIS - Threats and Hazards Information System,” databases that collect information regarding local natural hazards, as well as the exposure and the vulnerability of Camerino’s Old Town.

This follows up a process set in motion a few months ago, when INGV carried out the installation of an urban seismic network in Camerino: the first Urban Seismic Observatory in Central Italy. The real-time data recording was started, collecting information that will be integrated into the “THIS” Information System -- this data will prove useful as Camerino uses the ARCH Decision Support System.

To give local context, Prof. Alessandro Zona (UNICAM - University of Camerino) presented the monitoring systems installed in the Ducal Palace and in the Church of Santa Maria in Via. From these two systems, recorded data will be used to define new strategies as the city works toward restoring masonry damaged by seismic events in 2016. These information systems are key for the Decision Support System, another ARCH resource that was introduced by Eng. Sonia Giovinazzi (ENEA - Italian National Agency for New Technologies, Energy and Sustainable Economic Development).

This meeting was a step forward in co-creating and improving the two above-mentioned Information Systems, both of which will be crucial in Camerino’s work to enhance the resilience of its historic areas. To follow up on this progress, an “Open Day” workshop will display these tools to a broader local audience, and raise residents’ awareness of natural hazards.