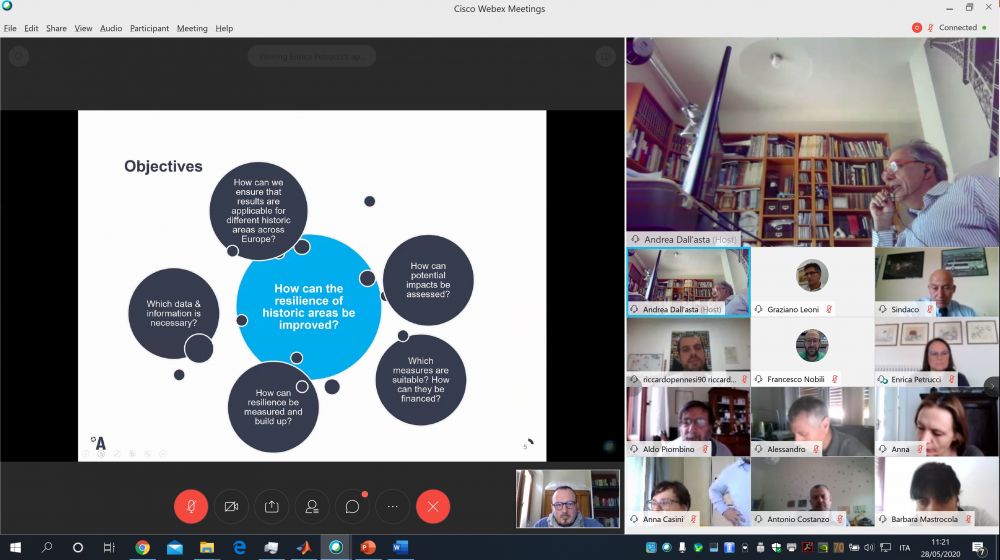 A key objective of ARCH is to ensure that the needs, concerns and capacities of local stakeholders will be actively aligned with the project's research agenda, and ultimately reflected in the tools to be developed. With this in view, all ARCH pilot cities participating in the project are working on establishing local partnerships that bring stakeholders together and facilitate their involvement during the lifetime of the project. City staff in Camerino (as well as Bratislava, Hamburg, and Valencia) have mapped key stakeholders in the fields of cultural heritage management, climate adaptation and disaster risk reduction. In engaging their stakeholders, city partners are encouraged to build on the co-creation framework defined by the core ARCH team:

"Within the ARCH project, co-creation is the democratically governed creation and joint development of knowledge, models, methods, tools, services, policies, and strategies by the project partners and their stakeholders based on trust, transparency and effective communication. The co-creation process in ARCH takes an adaptive approach that responds to changing realities and endeavours to transfer results to local governments."

From among the four ARCH pilot areas, the municipality of Camerino became the second – after Bratislava – to kick-off the work of its local partnership. The launch event took place on 28 May 2020 and, in the spirit of the times, was held online. Nevertheless, 45 participants representing 27 stakeholder organisations attended the meeting, and many of them expressed their keen interest in ARCH and the tools to be developed in the project. Among them were Anna Casini, the Vice President of the Marche Region administration, Elena Speranza, a scientific advisor at the Civil Protection Department of Italy, and Paolo Iannelli, National Crisis Unit Director at the Ministry of Cultural Heritage and Activities and Tourism. This highlighted the potential value for stakeholders of ARCH's systemic approach  and the possible benefits of applying existing and developing tools and plans for monitoring and diagnosing seismic risk. Francesco Nobili, the president of CONCENTRICO, the Committee for the Safeguard and Reconstruction of the Historic Center of Camerino, commented:

"We look with great interest at this project. Camerino must become a resilient city, not only from an architectural point of view but also from a community point of view. In both aspects, particular attention must be given to the historic centre. It must be recovered in such a way that it can be usable – at least partially – even in the event of future disasters. Red areas so extensive in size and time will no longer have to occur in order to avoid the dispersion of an already widely dissipated community."

"ARCH is a really interesting project that takes into consideration not only the physical reconstruction of buildings, but also the problems that the community faces after the calamity, the earthquake that disrupted the city life from all points of view."

The discussion between the municipality of Camerino and local stakeholders will continue in the form of consultations, with additional meetings to be scheduled in fall 2020, and stakeholder input to help shape the Local Work Plan that Camerino is currently developing. ICLEI is supporting this process with guidance on digital forms of engagement given the rise of remote working in light of Covid-19.