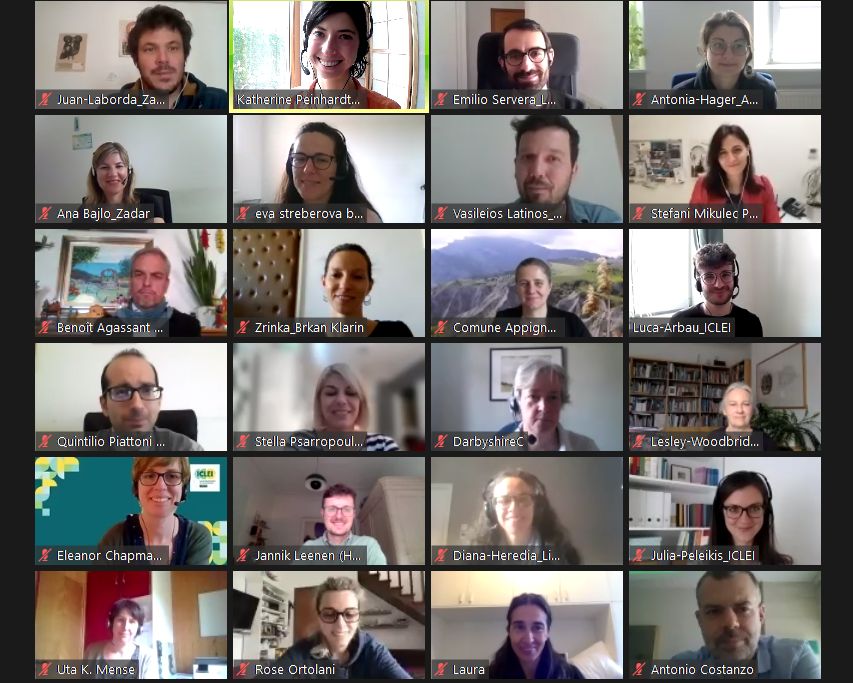 Following up after the kick-off of the ARCH Mutual Learning Framework, the 16 participating cities convened in May for the second in an ongoing series of Mutual Learning Workshops. Continuing their direct exchange of knowledge and expertise, city representatives from across Europe joined in for the presentation of various ARCH methodologies and tools, and for targeted discussions around boosting the resilience of their historic areas. This time, the overarching theme was to explore how data collection can be a part of this work; informing the way these cities go about protecting their cultural and natural heritage from natural hazards.

To start up the conversation about the importance of data for local action on resilience, city representatives explored the ARCH Disaster Risk Management Framework; an innovative resource that combines disaster risk management (DRM) and climate change adaptation (CCA) with a specific focus on historic areas. The framework is well-adapted to use by this group of cities, in large part because it was composed with heritage managers and public administrators in mind.

Over the course of the meeting, the ARCH cities formed four breakout groups — each of which included one of the initial foundation cities and multiple keystone cities. There, participants took the opportunity to discuss risks and vulnerabilities to natural hazards that they share in common. During these sessions, the city representatives also introduced their cities’ respective historic areas, and in so doing, participants were able to see potential areas of collaboration with one another and exchange insights around shared challenges and goals.

In one breakout session, representatives from Bratislava, Cannes, Warsaw and Zadar discussed their local experiences with hazards like flooding and heat, identifying similarities across cities along the way. Over the course of the conversation, participants also discussed the influence of pavement and building materials on flooding risk, and looked at progress on mapping at-risk historic areas, as well as the potential to integrate nature-based solutions in disaster risk reduction.

At the same time, ARCH foundation city Camerino convened with representatives from Appignano del Tronto, Maribor and Rhodes (Dodecanese), discussing how data could be a part of facing local hazards like earthquakes and air pollution that these cities have in common. Their discussion clarified the need for information systems into which cities can enter relevant data; a process that participants saw as a vital opportunity for collaboration with local universities. But the conversation was not purely technical: it also touched on topics like sustainable tourism, and in general, was driven forward by a shared interest in social resilience.

In the breakout session that included Valencia, Alba, Zaragoza and Augsburg, participants kept the focus on agricultural and natural areas. City representatives discussed shared risks of flooding, heat waves and drought. But beyond simply sharing common risks, the discussion helped to clarify various areas of shared interest among these cities, including: synergies between tourism and food production; peri-urban and agricultural/water-related heritage; river greening projects; and local food systems.

Meanwhile, Hamburg, Regensburg, Liverpool and Thessaloniki discussed shared challenges like flooding, lack of green space, and aging infrastructure. Two aspects that became a common thread over the course of the breakout session were public spaces and green infrastructure. For example, participants discussed goals of enhancing liveability and recreation opportunities through enhanced or expanded green spaces, while simultaneously gaining the more physical resilience-building benefits of these interventions. For example, the latter might include improvements like the reduction of urban heat through the addition of greenery.

The participants also explored the ARCH Historic Areas Information System (HArIS), developed by the Italian National Institute for Geophysics and Volcanology (INGV) for use by ARCH foundation cities. This was a good chance to drive home the importance of data collection in resilience initiatives. By presenting this database of geo-referenced information on historic areas, the conversation around the importance of local data for resilience building began anew. The discussion brought up vital questions about exactly which data should cities collect to become more resilient against natural hazards, among others. City representatives were then invited to dig in further about local progress on collecting and using resilience-related data, and in the spirit of the Mutual Learning Framework, to share their best practices with one another. In fact, over the course of the meeting, many participants agreed to follow up, sharing their approaches even outside of the workshop.

The session came to a close with a discussion of how to move forward on data collection, bringing up questions about what data is most important to collect in working towards more resilient historic areas, and about what progress cities have already made, that others might be able to learn from.