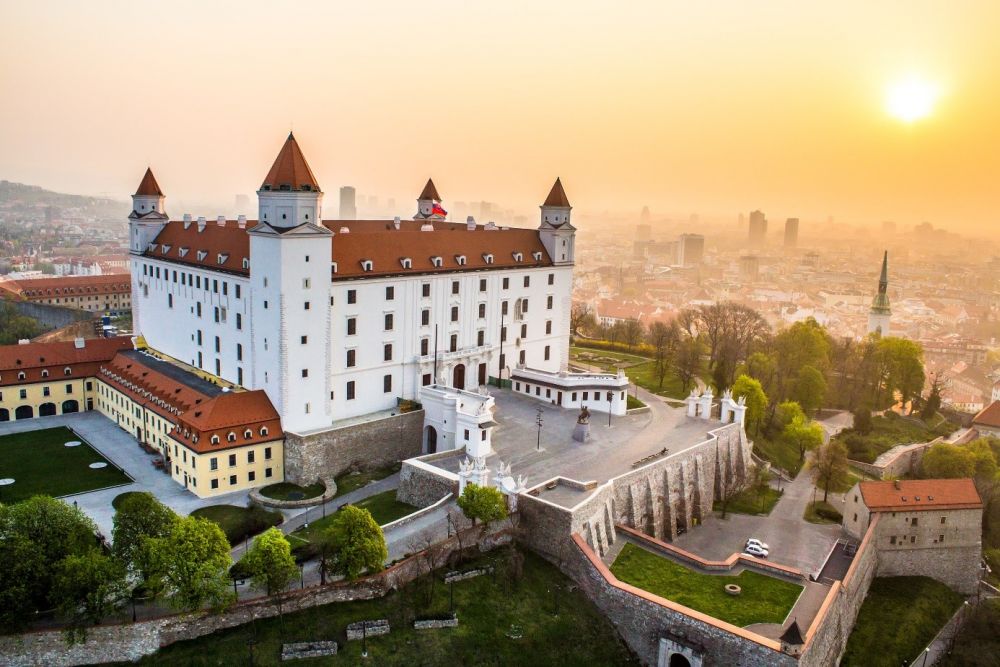 Image: The Bratislava Castle with the St. Martin´s Cathedral in the background. Source: www.visitbratislava.com.

To present ARCH to local stakeholders, the City of Bratislava held an introductory meeting with them earlier this spring. The event marked the start of the work of its local partnership. The discussion revealed that the impact of pluvial flooding and erosion on the city’s landmark heritage sites are among main stakeholders’ concerns with regards to cultural heritage preservation in Bratislava. Consultations with local stakeholders will be now resumed online.

The introductory meeting, which kicked off the work of the local stakeholder partnership, was hosted by the Office of the Chief City Architect, Comenius University in Bratislava (UNIBA) and Municipal Monument Preservation Institute in Bratislava (MUOP) on 3 March. The event saw the attendance of key local stakeholders, including the Mayor of Devin city borough, representatives of the Bratislava City Museum and Gallery, the Monuments Board of the Slovak Republic (regional authority), Historical Museum of the Slovak National Museum, and Bratislava Water Company Ltd.

During the meeting, Eva Streberová, ARCH manager for Bratislava, explained the opportunities for co-creation between the local stakeholders and the ARCH project, and Anna Gondová from MUOP and Eva Pauditšová from UNIBA delivered technical presentations. In the following discussion, several concerns have been pointed out by the stakeholders. One of them is the risk of pluvial flooding and its impact on the centre of Old town borough, the area designated as historical preservation reserve. Particularly, the reconstruction of pavements accompanied by intensive rainfalls is causing damage to heritage objects that are preserved in underground levels of historic buildings. Furthermore, in the Devín city borough, the Devín castle is facing an increased risk of erosion of its walls and the cliff on which it stays. The artefacts preserved in the castle are also threatened by humidity.

The future development scenarios of climate change and other hazards, such as erosion, are urging local stakeholders and the city of Bratislava to change their perspective on the practices of cultural heritage preservation and urban planning. The tools currently developed in ARCH will offer substantial support in this regard, and their use can become a standard practice for resilience planning. Therefore, the involvement of local stakeholders is crucial, and the city of Bratislava encourages them to share their insights as much as possible.

Further in-person meetings with stakeholders have been postponed due to the COVID-19 pandemic, but they will be now resumed as online meetings. The next meeting will be held on 25 and 28 May. In preparation for it, local research partners gathered video material that will help the participants better understand the situation in Bratislava and its cultural heritage area targeted in ARCH. The meeting will be held on two days: the first part will allow participants to better familiarise themselves with the study area and the work to be done there in the scope of ARCH, and the second day will be dedicated to a discussion and meeting the exact needs of the city and local stakeholders. For further inquiries about the meeting, please contact the project team at savingculturalheritage(at)gmail.com.

To get further insights about cultural heritage sites of Bratislava, Camerino, Hamburg, and Valencia and the work to be carried out there in the scope of ARCH, have a look at the project Deliverable 3.3 City Baseline Report here.